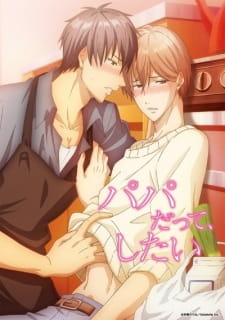 Asumi Kouya is a college student who wants to earn some extra money. Utilizing his talents for cooking and cleaning, he accepts a part-time job as a housekeeper. His employer is single father Keiichi Naruse, an attractive young man with a troubling history regarding his former staff. Naruse's time is constantly dominated by work and his adorable son Ichika, and he rarely gets time to himself. Cleaning the man's room, Asumi gets a startling insight into just how frustrating the life of a single parent can be. He finds a pile of adult videos, which results in plenty of implications. Despite Naruse being a man, Asumi finds himself completely drawn in by his employer's beautiful face and gentle personality. With the promise of allowing the frustrated father sexual relief, Asumi's life as part of this small family has only just begun. [Written by MAL Rewrite]