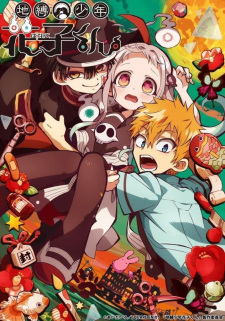 The famous "Seven Wonders" that every school seems to have are a staple of Japanese urban legends. One of the most well-known of these tales is that of Hanako-san: the ghost of a young girl who haunts the school's bathrooms. Kamome Academy has its own version of Hanako-san's legend. Rumors claim that if one successfully manages to summon Hanako-san, she will grant her summoner any wish. Lured by the gossip, many people have tried to call upon her, yet every attempt has failed. However, when Nene Yashiro, a girl hoping for romantic fortune, dares to summon Hanako-san, she discovers that the rumored "girl" is actually a boy! After a series of unfortunate events involving Nene's romantic desires, she is unwillingly entangled in the world of the supernatural, becoming Hanako-kun's assistant. Soon, she finds out about Hanako-kun's lesser-known duty: maintaining the fragile balance between mortals and apparitions. [Written by MAL Rewrite]